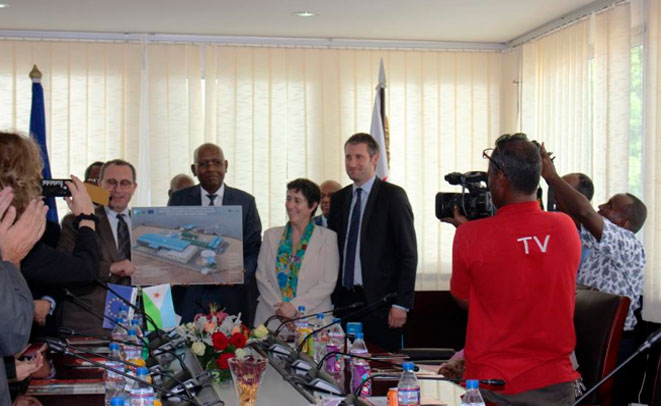 EPC contract awarded for a Seawater Desalination Plant in Djibouti

The Cobra Group, through the consortium led by its Tedagua subsidiary, together with French construction firm Eiffage Génie Civil, was selected for the EPC (Engineering, Procurement and Construction) contract execution for a seawater desalination plant located in Doraleh, which will improve the supply of drinking water to the city of Djibouti, capital of the republic of the same name located in the Horn of Africa. The award budget was €46 million, of which €5.5 million will be financed by the nation of Djibouti and €40.5 million by the European Union (EU), as part of the “Sustainable Energy for All” community initiative.

The aim of the project is to build a reverse osmosis desalination plant with an initial capacity of 22,500 m3/day, with civil works infrastructures designed to undertake a future expansion up to 45,000 m3/day. It also includes the construction of a 5,000 m3 regulation tank and 8.5 km of 700 mm diameter pipeline, which will connect the plant to the drinking water distribution network in the city. The works will begin this year and will continue for 3 years. The contract also includes the operation and maintenance of the facilities for a period of five years.

The new facilities will supply drinking water to some 200,000 people in areas where there are still significant deficiencies between water supply and demand. The energy necessary to operate the desalination plant will be supplied entirely by a wind farm to be built nearby, which will improve the energy cost and, as a result, the price of water in the homes.

The contract for the European Commission’s (EC) PEPER (Drinking Water Production through Desalination and Renewable Energies) project was signed in the presence of the Minister for Economy and Finance, Ilyas Moussa Dawaleh, the Minister for Industry, Agriculture, Water, Fishing and Fishing Resources, Mohamed Ahmed Awaleh, the European Union’s Director General for International Cooperation and Development, Stefano Manservisi, and the European Union’s Ambassador to Djibouti, Adam Kulach.